The Pullman district on Chicago’s South Side has a long history and a strong sense of community. Originally developed as an area of workers’ housing in the 1880s by the Pullman Company, which made railway carriages. It subsequently fell into decline, and by 1960 was threatened with total demolition. However, local residents rallied to object and today the original buildings have the status of protected landmarks. Although there has been some gentrification in recent times, the area is not an affluent one, and the building of the new Track & Field Centre in Pullman’s Gately Park is a very welcome addition to its amenities.

“IT WAS CONCEPTUALISED BY THE LOCAL COMMUNITY, WHO WANTED A PLACE TO BRING TOGETHER TRACK AND FIELD IN CHICAGO IN A WAY THAT HAD NEVER BEEN DONE BEFORE. IT’S A STATE-OF-THE-ART FACILITY AND WITH THE PRIMARY PURPOSE TO GIVE KIDS IN CHICAGO AN OPPORTUNITY, IN A PLACE THEY CAN BE PROUD OF.” 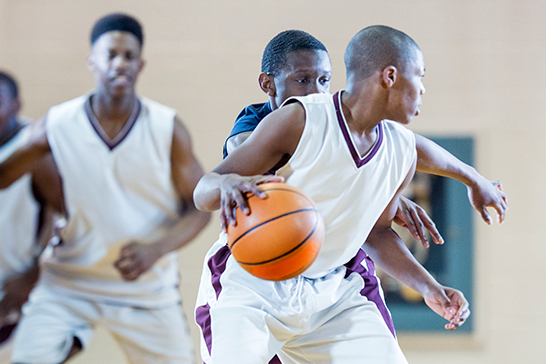 In fact, the 13,000 square metre Centre, owned by the Chicago Park District, owes its existence to one man in particular. Dr. Conrad Worrill, one of Chicago’s leading civil rights activists and African American scholars, had lobbied the city to invest in a track and field stadium for many years. As a student he had witnessed first-hand how the city’s young athletes had to practise their sport in school hallways, and he was a passionate believer in the link between athletics and academic achievement for young people.

A striking, modern construction, its exterior is wrapped in aluminium, glass and brick. But the Centre’s pièce de résistance is without doubt its hydraulically banked 200-metre track, only the twelfth of its kind in the country. Other features include a 370 square metre warm-up area, eight sprint lanes, and areas for long jump, triple jump, high jump, pole vault and discus. There is also seating capacity for 3,500 people. Hoops and nets can be lowered from the ceiling to provide four basketball courts and six volleyball courts.

The Centre opened in 2021 and now hosts a wide range of events, from high school training to collegiate meets, plus programs and classes in a variety of different sports and activities. “It’s really driven interest and awareness for those sports not just in the Pullman community but throughout the Chicago area,” says Serra.

The Centre aims to operate all year round, which means keeping temperatures cool during the hot summer months is essential. Fittingly for such a modern building, cooling in the various track and office areas is maintained by four Güntner Flat VARIO Condensers, controlled by Güntner’s intelligent GMMnext refrigeration control system. This allows several different cooling circuits to be separately programmed within each Güntner Condenser.

“GMMnext has the ability to prioritise circuits, which makes it a much more economical – and environmentally friendly – way to fulfil multiples areas of the cooling system. At the Centre we’re controlling nine circuits, with nine different pressure set points, with just those four standalone dry coolers”, says Zachary Wernlund, Güntner’s Smart Solutions Manager for the Americas.

“GÜNTNER SMART SOLUTIONS, SUCH AS GMMNEXT, CONNECT AND SHARE DATA, OPENING UP NEW POSSIBILITIES IN TERMS OF COST-SAVING, EFFICIENCY, SYSTEM LONGEVITY AND SUSTAINABILITY. AS A RESULT, THE INDUSTRY IS BEING TRANSFORMED, AS CUSTOMERS COME TO UNDERSTAND THE MANY BENEFITS OF SMART, SOPHISTICATED CONTROL SYSTEMS – JUST LIKE THE ONE WE PROVIDED AT THE TRACK & FIELD CENTER IN GATELY PARK.”

Sadly, Conrad Worrill passed away in 2020 before construction of the Centre was completed. “Although he did not get a chance to see children run on the track, he did have an opportunity to see the building near completion,” says his daughter, Femi Skanes. “He would burst with pride when he talked about the new stadium.” In February, 2022, in tribute to her father’s years of effort in making his dream a reality, the building was officially named the Dr Conrad Worrill Track and Field Centre at Gately Park.