Back to all news

The light of innovation

At the end of April last year, the eyes of the world rested briefly on the picturesque town of Birkenfeld in the south west of Germany. Nearly 300 of the 1,100 workers at the local meat processing plant had tested positive for Covid-19, beginning a trend that would continue not only in Germany but around the globe, as other slaughterhouses proved themselves to be fertile breeding grounds for the virus.

“It became very clear that it was necessary to protect both the food that’s coming out of the plants and also the people working in them."

“It became very clear that it was necessary to protect both the food that’s coming out of the plants and also the people working in them,” says Michael Freiherr, Güntner’s Managing Director. Güntner air cooling technology is widely used in the food processing sector, and Freiherr immediately set up a research and development programme to develop an air cooler that could help to minimize the risk of infection.

After looking at different methods of neutralizing bacteria and viruses, it was quickly established that the use of UV-C light was the fastest and safest solution to the problem. Short-wave ultraviolet radiation had been proved to be effective in destroying such microorganisms, including the Covid-19 virus – but not necessarily when used in an air cooler.
“We’ve put UV-C lights in air coolers in the past if customers have asked for it, so we had some knowledge of how to do it,” says Freiherr. “But until then everybody just supposed it would work. With a pandemic, you really need to have some certainty.”

Güntner’s team sat down with biologists from the renowned Fraunhofer Institute for Process Engineering and Packaging to work out a schedule of testing to prove its technology really worked inside a cold room. “Initially we wanted to do it in their labs, but the conditions weren’t the same as in a real world cold room,” Freiherr says. “So we decided to go into our own lab in Fürstenfeldbruck, where we have our own cold room.”

The new air cooler, which has an internal UV-C emitter housed between the heat exchanger coil and the fan, was installed in the Fürstenfeldbruck lab and the team began testing bacteria levels that occur naturally in the air –bringing an unexpected discovery. “From the initial research that we conducted, the only claim that we could make was that we probably had the cleanest labs in the world!” Freiherr laughs. “There just wasn’t enough bacteria in the air.”
To make up the shortfall, the team introduced endospores of bacteria subtilis, which is harmless to humans and commonly used in scientific research. They were then able to measure how levels fell as air was irradiated inside the units when the UV-C light was used, and how they increased when it wasn’t. As a result, Fraunhofer’s biologists could confidently say that 99.9 percent of all airborne germs would be killed within the space of a few hours. 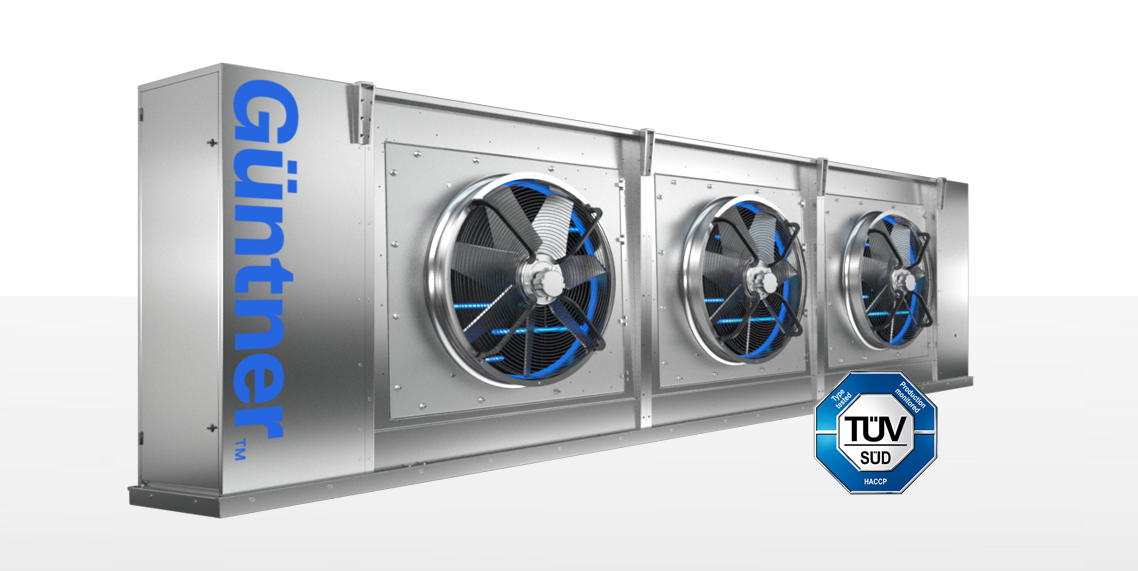 The Güntner CUBIC Vario air cooler with UV-C was launched in November and boasts other special features to ensure hygienic operation. All materials used are certified for use with foodstuffs, and the edges of the drip tray are angled, preventing dirt from gathering. The entire casing is not only fully accessible for cleaning, but is also thermally decoupled, which prevents water from condensing on the casing.
“It makes sense as a product because you use it to improve the hygiene measures you’re already taking,” says Freiherr. “I anticipate the coolers being used overnight with the UV-C emitters on when no one is actually working. It’s the best case scenario from a safety perspective, and with our powerful technology, it would be enough time for the coolers to kill all the bacteria and virus in the room.”

Discuss Your Next Project